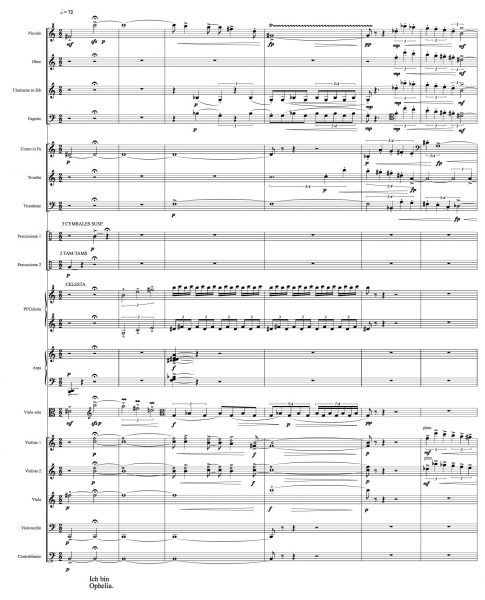 On the occasion of his 30th birthday, Finnish-French stage director Aleksi Barrière presents different aspects of his works through three small pieces; three possibilities to discover his way of creating dialogue between texts and music, body and voice. The performances are accompanied by his most trusted collaborators from La Chambre aux échos, a musical theatre company founded and co-directed by Barrière with conductor Clément Mao-Takacs.

In this solo performance, virtuoso singer Marianne Seleskovitch performs a cappella pieces from the last 60 years, exploring the physical origin of vocal expression. When performing, she is looking for all the voices she can find within her, letting the language of music take her far away to other dimensions.

From 2012 onwards, Aleksi Barrière has regularly collaborated with SECESSION ORCHESTRA, through program notes, consulting, writing, text collages and projects with La Chambre aux échos. A monologue which he has written for the ensemble, inspired by a work by Jean Sibelius, will be combined here to the poetry of Eeva-Liisa Manner, and an extract from Juha T. Koskinen’s work Ophelia/Tiefsee, which La Chambre aux échos has presented in Paris at Festival Présences and in Helsinki at Festival Music Nova.

8 pm. THE TALE OF THE SOLDIER FATZER

A combination of music theatre and cabaret performed by the musicians of SECESSION ORCHESTRA and actor Thomas Kellner, this showpresents Aleksi Barrière’s rewriting of Stravinsky’s and Ramuz’s classic. Going back to 1917 and the horrors of war, deserting soldiers, Lenin, Bertolt Brecht and his character the God of Happiness lead us through history and questions of egoism, communism and Finnish tango.

Aleksi Barrière is an author, stage director and the co-founder of musical theatre company Chambre aux échos, with conductor Clément Mao-Takacs. In 2018-2019 the company performed his stagings for example at Tampere-Talo in Finland, Lieu Unique in Nantes and Kulturhuset of Stavanger. The company has commissioned works for venues and festivals in France, Belgium and Croatia, and has presented its version of Kaija Saariaho’s opera La Passion de Simone all over Europe and in the United-States. Aleksi Barrière was also recently a guest stage director at Trap Door Theatre in Chicago, at the Hamburg Staatsoper, at Autunnale in Bergen and New School in New York. His scholarly work is like his performances dedicated to interstitial spaces between theatre and music.